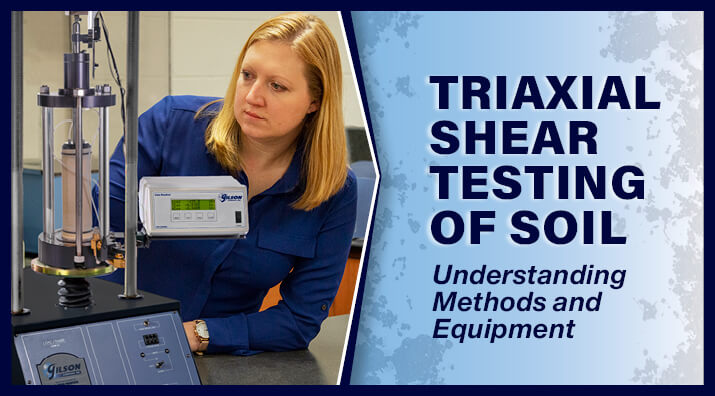 What is the Triaxial Shear Test?

Triaxial testing is a type of shear test for solid materials performed while the specimen is under confining pressures on all sides. The confining pressures are generated in a fluid chamber to simulate stresses from surrounding soil materials. It then can give a clearer picture of the behavior of materials in place. This testing principle applies to rocks, powders, and construction materials, but this blog post will focus on the triaxial shear testing of soils.

What is the Purpose of the Triaxial Test?

The purpose of the various procedures is to measure the triaxial shear strengths of soil specimens subjected to different drainage conditions in the field. The results provide valuable information for the engineered design and construction of soil embankments, pavements, and structure foundations. Determining the mechanical behavior of soil materials through triaxial testing helps ensure that the soils supporting the structures are adequate for the proposed use – and its continued performance.

Triaxial shear testing for soils is not just one test. This blog post will discuss three different test methods, each one with variable requirements based on soil types and properties of individual specimens.

The Background Behind the Test

A Hungarian engineer named Theodore von Karman built one of the earliest triaxial test devices in 1912 for testing the behavior of brittle rocks for geophysical applications. Arthur Casagrande developed the first triaxial test for soils in 1930. Casagrande was a contemporary of and sometime assistant to Karl von Terzaghi at the Massachusetts Institute of Technology. During visits to German and Swedish soil mechanics research centers in 1929, he saw a need for an improved method of shear testing that accounted for the natural confining forces surrounding soil materials in place. Upon returning to MIT, he designed and built his first triaxial test apparatus for soils.

These are some significant components of the specialized equipment required for triaxial testing:

Soil samples, either undisturbed and extruded from thin-walled tube (Shelby tube) samplers, or remolded or compacted in the laboratory, are formed and trimmed to size using specialized sample preparation equipment. A latex membrane to control fluid migration, porous stones at each end, along with a cap and pedestal for mounting in the test cell, are fitted using A test cell kit and other tools and accessories. 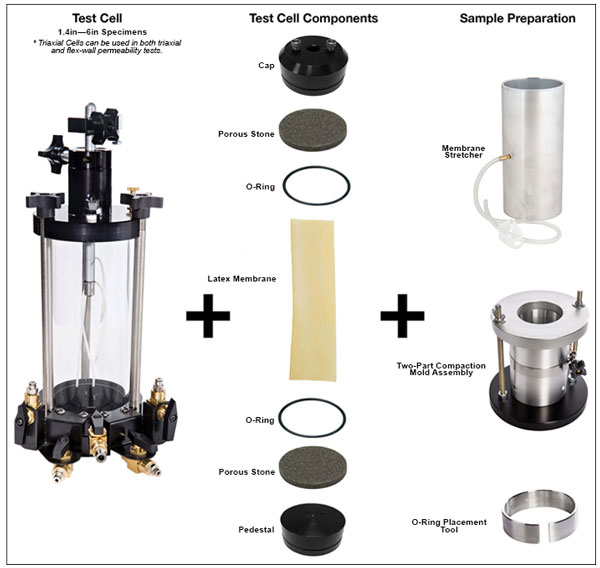 The assembled test cell containing the prepared specimen and water is mounted in the load frame. Air and water lines to the triaxial control panel are connected, and load and deformation measurement instruments are installed and zeroed. There are three phases for triaxial tests, and each step has variations unique to the particular test method. Successful testing depends on a thorough reading and understanding of the specific test method used.

Final calculations and data reporting for each test follow the requirements of the individual test methods. Clearly, triaxial testing is not one-size-fits-all. Each of the standards includes multiple variables based on specimen types and the protocol selected. If you have questions on your specific application, please contact us for guidance or visit our triaxial testing equipment page for more information.