Permeability of Soil Test: All You Need To Know 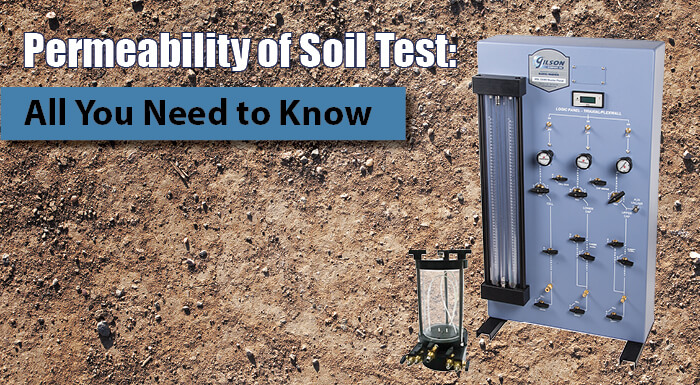 What is Permeability of Soil

Soil permeability, or hydraulic conductivity, is the rate of the flow of water through soil materials, and it is an essential characteristic across a broad spectrum of engineering and earth science disciplines.

Geotechnical and civil engineers, hydrogeologists, soil, and environmental scientists all use this information for projects such as structural foundations, embankments, earthen dams, flood management, effluent infiltration, and more. It’s no surprise that the porosity and permeability of soils are related.

Darcy’s law, which dictates all results from soil permeability tests, is an equation describing the movement of fluids through a porous medium. This equation defines the coefficient of permeability or hydraulic conductivity of soils, a ratio of fluid velocity through the soil matrix to the hydraulic gradient.

The coefficient of permeability (K) is the velocity in meters or centimeters per second of water through soils. Fine-grained soils such as clays might have values of around 10-8meters/sec or lower, or a sand and gravel formation could be 10-4meters/sec or higher.

Soil permeability can be estimated using empirical methods like soil survey mapping, soil texture, or particle size distribution. However, a variety of different laboratory and field test methods make it just as easy to measure these properties directly. The soil type and purpose of the test, accuracy required, and specimen type influence the selected test method.

This blog will be your guide in selecting equipment to meet the test method requirements and match the soil type.

How is Soil Permeability Measured

What is the Soil Percolation Test?

Percolation (“perc”) tests are a simple type of field test often required by local health departments to select a type of septic system for residential or commercial applications in fine-grained soils.

How is the Perc Test Performed?

The typical procedure is to use a  soil auger or post-hole digger to dig a hole approximately 18 to 30in (457 to 762mm) deep, fill it with water, and monitor the time it takes to drain. There are dozens of variations to this method among local regulatory agencies, so it’s not possible to give clear procedures here. Results of perc tests can be influenced by so many factors that they are considered unreliable for most scientific or engineering applications.

We hope this blog has answered your questions on how to select methods and equipment for your soil permeability testing applications. Please contact our experienced technical support team for detailed information.