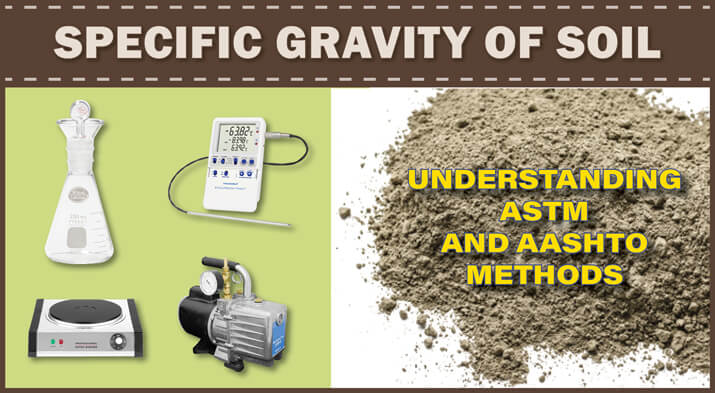 Specific gravity is a fundamental property of soils and other construction materials. This dimensionless unit is the ratio of material density to the density of water and is used to calculate soil density, void ratio, saturation, and other soil properties. Applications include the foundation design for structures, calculations for the stability of soil embankments, and estimations of settlement for engineered soil fills.

Traditional methods for determining specific gravity are straightforward. Standard test methods described in the U.S. Army Corps of Engineers laboratory soils testing manual, and some state DOTs are often considered adequate for basic applications. As with any laboratory test, these methods require attention to detail but are easy to perform correctly and do not require much in the way of specialized techniques or equipment.

ASTM D854, and the identical AASHTO T 100, Standard Test Methods for Specific Gravity of Soil Solids by Water Pycnometer, focus on producing measurements with a high degree of precision. While the equipment required is not sophisticated, the procedures are extensive and meticulous, and performing the test by the book can be a challenge. Practitioners should be aware of the significant differences between the test methods. Reliable test results depend on strict adherence to the practices and techniques outlined. This blog post will focus on the equipment and procedures used to perform the ASTM/AASHTO method. 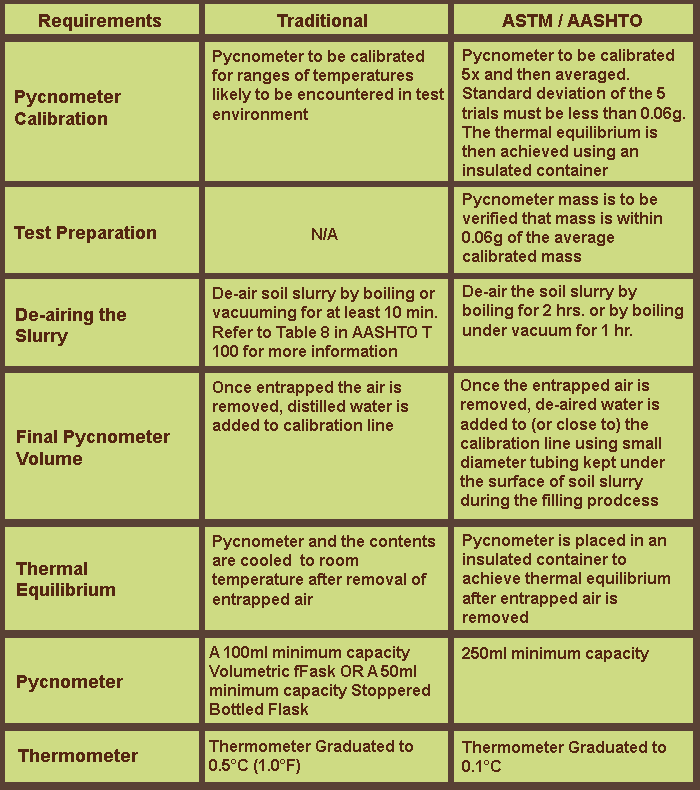 Each step for calibration is described in the test method, but here are the main points:

It goes without saying that you will want to follow these steps carefully to avoid having to repeat them!

This specific gravity test method applies to soils passing the No. 4 (4.75mm) sieve. For soils that include larger particles, ASTM C127 determines the specific gravity of the fraction retained on the No. 4 test sieve. The test may be performed on either moist or oven-dried specimens, depending on the method requested.

Method A, the moist procedure, is preferred, and for some highly plastic, fine-grained, or organic soils, is required. The exact size of the test specimen is not predetermined. The table in the test method determines the range of the recommended mass for the sample, based on the soil classification from ASTM D2487.

Measuring the Mass and Temperature

The final step in performing the specific gravity tests is to determine the mass and the temperature of the suspension.

The entire suspension is rinsed into a tared pan and oven-dried to determine the dry mass of the soil solids. The dried soil sample can cool in a desiccator and then weighed to the nearest 0.01g.

We hope this guide to the ASTM D854/AASHTO T 100 method and equipment has helped you understand the difference between this and some other test methods being used. Visit our Soil Specific Gravity Testing Equipment page to view all offerings. Please contact Gilson’s testing experts to discuss your application.