What is Superpave? Understanding Performance-Based Asphalt 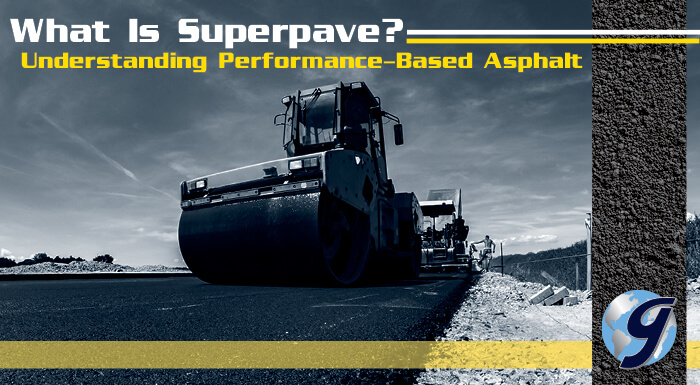 The term "Superpave" is an acronym for Superior Performing Asphalt Pavements, which evolved from partnerships created among the Federal Highway Administration (FHWA), American Association of State Highway, and Transportation Officials (AASHTO), TRB, and others in the SHRP community.

Congress provided additional funding for this and other transportation-related programs in 1991 through the Intermodal Surface Transportation Efficiency Act (ISTEA). As with many large-scale programs at the federal level, its origins came from simple questions and ballooned into complex and numerous offshoots as time passed and funding permitted. In this blog post, we’ll discuss the impact of Superpave from the perspective of mix design, construction materials testing, and resources for laboratory equipment.

Superpave is an asphalt mix design method that has its roots in a report released back in 1984 by the Transportation Research Board (TRB), America's Highways, Accelerating the Search for Innovation. The report outlined the need for increased state and federal funds to develop badly needed research for better and longer-lasting highways. In response, Congress authorized funds in 1987 for the Strategic Highway Research Program (SHRP), a five-year program to evaluate and develop ways to improve the durability and efficiency of asphalt and concrete pavements, concrete structures, safety, and overall performance of America’s highways.

Rather than a specific process or procedure, Superpave is a performance-based specification for asphalt binder and volumetric mixture design. The idea was to allow asphalt pavement designs that could handle the unique weather and traffic conditions of a given site in any geographic area of the U.S. The system consisted of three components:

Superpave leverages modern asphalt paving technology to develop mixtures more resistant to cracking from low temperature and fatigue factors and reduce permanent deformation. Superpave means mix designs can be tailored for better performance and longer life based on a geographical area’s temperature extremes, traffic loads, and utilization of the road or highway.

Compared to the Marshall design method, Superpave integrates material selection and mix design and uses an entirely different type of compaction. Instead of the impact of weighted hammer blows, the Superpave gyratory compactor (SGC) uses a hydraulically powered kneading system with an action much closer to the actual field densification of the mix. The applied force is constant, the number of gyrations can be controlled, and the device produces feedback on the compactibility of the asphalt material. Optimum densities developed with the SGC often require less asphalt binder than Marshall methods.

A 2002 article in Public Roads magazine, Superpave Comes of Age, points out that Superpave is not a one-size-fits-all solution. For instance, a mix design for pavement in the Nevada desert with warm temperatures and light traffic would not fare well on a frigid, highly traveled metropolitan Minnesota city road. The article also refers to Superpave as a “complex system of choices,” noting that new and different tests are required for the classification and selection of binder and aggregate.

The first step in the design process is a collection of the environmental and usage information for the project. In other words, maximum/minimum temperatures for both air and pavement, along with current and anticipated traffic types and loads. Testing and selection criteria for PG binder, combined aggregate requirements, and mixture design are detailed in AASHTO M 323.

A series of tests listed in AASHTO M 320 characterize the binder and its suitability for given environmental conditions. Some of the tests are not new but are now performed over a wider range of temperatures more directly related to field performance, and both short and long-term aging is considered. These tests are more effective in examining the properties that lead to thermal and fatigue cracking, as well as rutting.

Aggregates make up about 95% of an asphalt mixture, and their function in the overall performance of a pavement is critical. Superpave has unique criteria for aggregate acceptability that are detailed in section 6 of AASHTO M 323. Because aggregates from a single source rarely meet all the requirements, materials from different stockpiles are frequently blended to produce an acceptable mix design.

Once local environmental conditions have been collected to determine which PG asphalt binder to use and an aggregate blend has been selected, it’s time to establish the optimum binder content. Several trial mixes are prepared, two at the proposed binder content and two at 0.5% higher and 0.5% lower.

Each trial mix sample is compacted in the Superpave gyratory compactor using three different gyration cycles based on 20-year traffic loading estimates in millions of ESALs from AASHTO R 35:

Superpave continues to grow and evolve as a design method. These links are great sources of information for the background, history, development, and advancement of the practice.