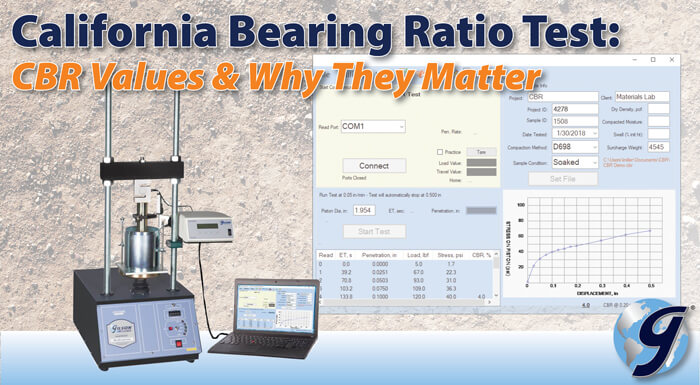 The California Bearing Ratio or CBR test is performed in construction materials laboratories to evaluate the strength of soil subgrades and base course materials. Those who design and engineer highways, airport runways and taxiways, parking lots, and other pavements rely on CBR test values when selecting pavement and base thicknesses.

The laboratory test method in ASTM D1883 and AASHTO T 193 for the CBR test is a simple empirical method, comparing resistance to penetration of the test specimen to that of a “standard” sample of well-graded crushed stone material using a standard-sized piston. The test does not characterize any soil properties aside from resistance to penetration. The Florida Department of Transportation developed a modified version of this method as the FM 5-515 Limerock Bearing Ratio (LBR) Test.

CBR testing can also be performed in-place on soil subgrades with an apparatus using the same size penetration piston or with the dynamic cone penetrometer (DCP). ASTM D4429 is often used as an exploratory test to determine in-place conditions of soils or bases or to confirm laboratory test results. This blog post will discuss the laboratory and field CBR methods, along with the DCP.

Why CBR Test Is Important

In the early 1900s, economic development drove the demand for more miles of better-quality roads, which in turn resulted in increased road traffic. In 1928 and 1929, engineers at the California Division of Highways (now Caltrans) developed the CBR test to ensure pavements could be economically constructed and still carry the anticipated axle loads. They established the penetration resistance of ideal crushed-rock base material as a standard reference to compare against all other soil and base course materials. California officially adopted the CBR test in 1935, and it is now a standard method in ASTM, AASHTO, U.S. Army Corps of Engineers (USACE), British Standards, and others. CBR values are recognized as integral to pavement and runway design by state Departments of Transportation, the Federal Highway Administration (FHWA), and Federal Aviation Administration (FAA). Extensive use of the California Bearing Ratio over a long period and information gained from field correlations have established its reliability for pavement design.

Sample preparation takes up most of the time required for testing CBR samples in the geotechnical laboratory. Materials proposed for the project are sampled and processed in the laboratory into a series of test specimens.

Preparation takes place using the same or similar steps found in method C of ASTM D698 or D1557 (AASHTO T 99 and T 180) moisture/density relationship (Proctor) tests. The specifier of the CBR test may request changes to the dry density of the specimens. Changing the required number of blow counts will adjust the dry density. Spacer discs, surcharge weights, and other apparatus to measure expansion are also necessary.

The test mostly applies to cohesive materials with maximum particle sizes less than 19 mm (0.75 in) but can also be used to evaluate the strength of granular soils and aggregates. For most methods, three to five samples are prepared and soaked for a period before the penetration test. The prepared test specimens are positioned in a load frame and subjected to regulated penetration loads from a piston with a surface area of 3in² (1,935mm²). Loads are recorded at specified penetration intervals and plotted graphically.

Several variations in sample preparation test methods are possible in the CBR test. Test methods can include a single sample tested at optimum water content (as determined by ASTM D698 or D1557), a series of three test specimens at optimum water content tested at different maximum dry unit weights, or the testing of each sample used in the development of a compaction curve. The two latter methods may also require compaction of several samples with different blow counts to adjust the final density of the sample materials. Selected test protocol should be clearly understood by all stakeholders, and especially the testing lab before preparation begins.

Soaking accounts for adverse moisture conditions from potential rainfall or flooding, and most CBR tests use this procedure. In addition to the compaction process, preparation usually involves soaking each specimen in water for 96 hours before the penetration test.

During the soaking period, a surcharge load of 10lbf (4.54kg) or more must be placed on the sample using surcharge weights to simulate the weight of the pavement and other loads specified. The soil swell resulting from soaking must be measured using expansion measuring apparatus and swell plates placed on the sample before penetration testing. It takes a significant amount of time to prepare multiple compacted specimens for a single test. Complete CBR testing sets containing multiple CBR molds and components are available to maximize testing productivity and efficiency.

Note: Unsoaked tests are not unusual in areas where rainfall amounts and the local water table are both low. 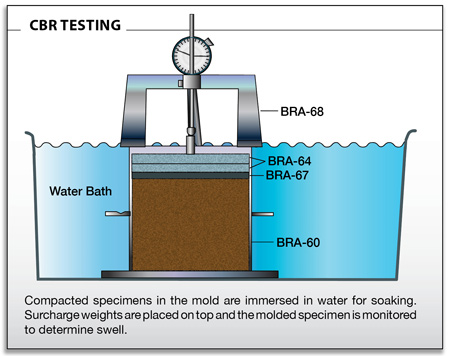 For penetration testing, the sample remains in the mold. With the perforated plate and the specified surcharge weights in place on the soil, the piston is seated against the test sample, and loading commences at a rate of 0.05in (12.7mm) per minute. As the piston penetrates the soil, test loads are recorded at eleven specified depths up to 0.500in (13mm). 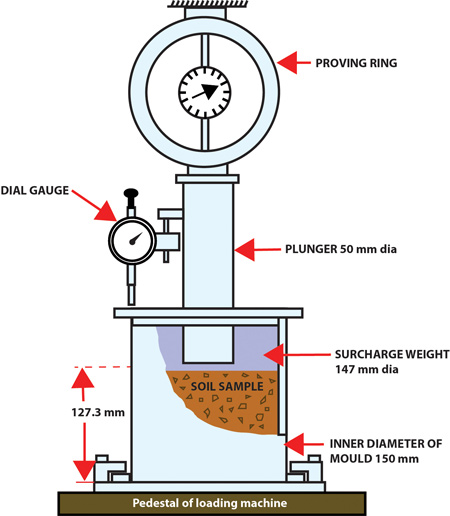 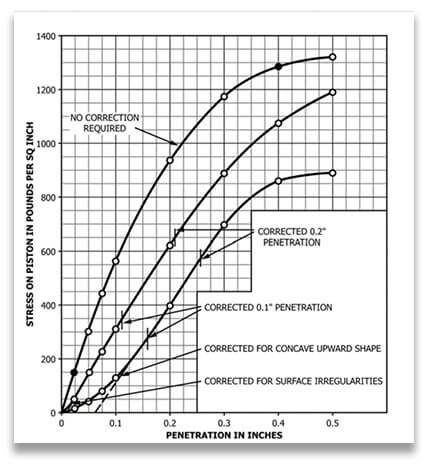 Field CBR testing is performed in-place on soil subgrades to determine in-place conditions of soils and bases or to confirm laboratory test results. The ASTM D4429 test method requires special CBR field equipment for loading. Soil saturation can be controlled in the laboratory but not in the field, so it is difficult to make a direct correlation between the two types of tests.

Note: This is a withdrawn ASTM standard that will be reinstated soon as a new or revised test method.

The Dynamic Cone Penetrometer (DCP) is another field test and often used to estimate in-place CBR values. ASTM D6951 outlines the requirements to use this test method for pavement design applications, and the measured values are widely accepted.

DCP test equipment is more portable and generally easier to set up in remote locations than the apparatus for field CBR. With this method, a cone-shaped point is driven with a sliding hammer down through soil layers, measuring penetration resistance. The DCP can also be used to characterize soil strata and relative strengths to a depth of 39in (1M) or more.

California bearing ratios of field tests represent in-situ strengths of the material under existing field conditions and will not typically correlate with laboratory CBR values of the same material. Saturation levels are near 100% for soaked laboratory samples. Field materials are often less than 80% saturated and, therefore, more resistant to penetration. The significance and use sections in the standard test methods give detailed guidance for interpretation. The chart below provides a rough idea of what to expect for laboratory and field CBR values of different soil types. 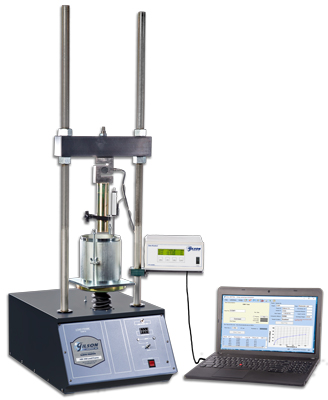 We hope this blog has given you some helpful information for performing the CBR test procedure. If you have questions, need help with your application, please contact us, or want more information on equipment visit our complete CBR Test Equipment page.