Rebound Hammer Test: What you May Not Know 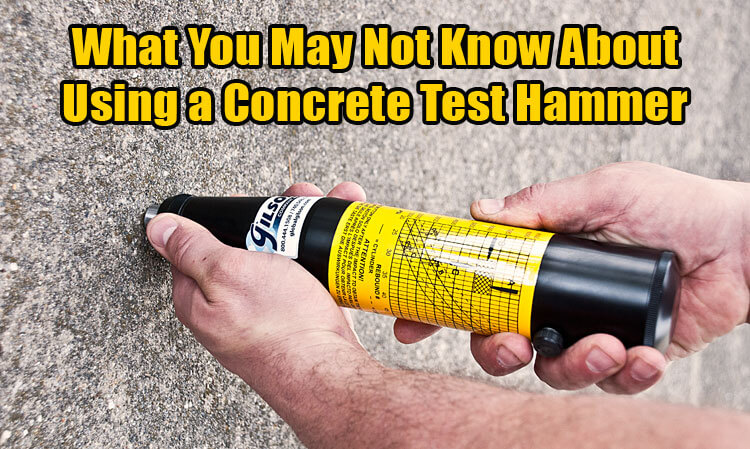 What is the Rebound Hammer Test?

The Rebound Hammer Test is great at establishing strength estimates and strength relationships by rebound number, but not so much at yielding highly accurate concrete compressive strength data. In fact, ASTM C805 states that “This test method is not suitable as the basis for acceptance or rejection of concrete.”

However, the Rebound Hammer is a valuable and essential part of your tool kit when assessing potential problems in concrete structures. It can also create problems in these same applications if it is expected to perform beyond its capabilities.

What is a Rebound Hammer?

A Concrete Rebound Hammer is also referred to as a Swiss Hammer, Schmidt Hammer, or just Concrete Test Hammer which is an instrument that is easily the most commonly used (and misused) device for testing hardened concrete.

A Rebound Hammer is designed around the notion that the strength of concrete is more or less related to its hardness.

However, the value determined is when the trouble starts, many Concrete Test Hammer models include a graph showing a relationship between hammer orientation, rebound number, and estimated compressive strength. Someone once told me the results came from a correlation with 150mm cubes tested in a European lab in the 1950s. I don't know if that’s true or not, but the point is that results taken from these graphs rarely correlate well with the actual compressive strength of the concrete being tested.

On the flip side, they can be useful in establishing relative and proportional strengths of the same concrete mix between different areas of a structure. The American Concrete Institute (ACI) committee 228 recommends procedures in ACI 228.1R to correlate rebound numbers to the particular type of concrete being tested by referencing concrete cylinders for new construction and drilled cores for existing structures. The cores or cylinders are clamped in compression machines and Concrete Test Hammer impacts are performed on the specimens just before breaking them for compressive strength values. This method allows you to establish some reliable estimates of strength, although as noted above, you can't accept or reject the concrete based on rebound results alone.

Another productive direction to take with the test hammer is using it to establish a relative strength profile of a structure. With it, one competent technician can quickly canvas large areas known to have potential strength problems and narrow down specific areas for more rigorous testing. Areas with lower rebound numbers can then be economically assessed with cores, penetration tests, or pulse velocity measurements while areas showing higher strengths can be bypassed, or at least not focused on.

Factors directly affecting rebound numbers include surface texture, moisture, age, carbonation and the proximity of aggregate, steel reinforcement, and air voids, so some care must be exercised in the selection and preparation of test areas. Used within its capabilities, the Concrete Test Hammer is versatile, reliable, and efficient; a valuable tool and a time-saver to help with a complete assessment of hardened concrete structures. Just don’t ask it to punch above its weight!

We hope this blog has given you a better understanding of the Rebound Hammer Test. For questions about your testing application, please contact us.