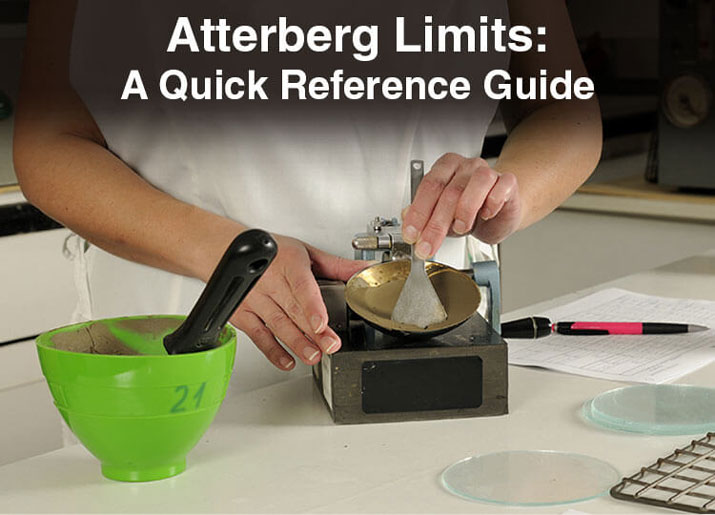 What is the Atterberg Limits Test?

Soils intended to support structures, pavements, or other loads must be evaluated by geotechnical engineers to predict their behavior under applied forces and variable moisture conditions. Soil mechanics tests in geotechnical laboratories measure particle size distribution, shear strength, moisture content, and the potential for expansion or shrinkage of cohesive soils. Atterberg limits tests establish the moisture contents at which fine-grained clay and silt soils transition between solid, semi-solid, plastic, and liquid states.

In 1911, Swedish chemist and agricultural scientist Albert Atterberg was the first person to define the limits of soil consistency for the classification of fine-grained soils. He found that plasticity is a unique property of cohesive (clay and silt) soils and suggested classifying soils with a particle size of 2µm (0.002mm) or less as clays.

Karl Terzhagi and Arthur Casagrande recognized the value of characterizing soil plasticity for use in geotechnical engineering applications in the early 1930s. Casagrande refined and standardized the tests, and his methods still determine the liquid limit, plastic limit, and shrinkage limit of soils. This blog post will define the Atterberg limits, explain the test methods, and discuss the significance of the limit values and calculated indexes. We will also cover lab testing equipment used in the standard test methods.

Why are Atterberg Limits Tests Important?

As moisture contents increase, clay and silt soils go through four distinct states of consistency: solid, semi-solid, plastic, and liquid. Each stage exhibits significant differences in strength, consistency, and behavior. Atterberg limit tests accurately define the boundaries between these states using moisture contents at the points where the physical changes occur. The test values and derived indexes have direct applications in the foundation design of structures and in predicting the behavior of soil infills, embankments, and pavements. The values assess shear strength, estimate permeability, forecast settlement, and identify potentially expansive soils. 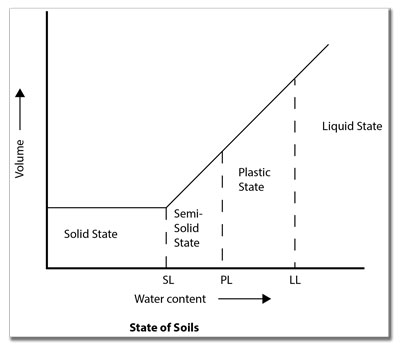 What are Liquid Limit, Plastic Limit, and Shrinkage Limit?

Now that you understand the importance of Atterberg limits let’s define the individual tests. The plastic limit, liquid limit, and shrinkage limit of soils are all test results obtained by direct measurements of the water content following the standard test methods.

How to Calculate Atterberg Soil Indexes

Is the plastic limit subtracted from the liquid limit and indicates the size of the range between the two boundaries. Soils with a high PI have a higher clay content. If the PI value is higher than the low to mid-20s, the soil may be expansive under wet conditions or exhibit shrinkage in dry conditions.

Is determined by subtracting the Plastic limit from the natural water content of the sample, then dividing by the plasticity index. Soils with a LI of 1 or more will be closer to the liquid state. A LI of 0 or lower indicates soils that are harder and more brittle. The LI allows the prediction of soil properties at different moistures.

The Activity number of a soil sample is the ratio of the plasticity index to the clay-size fraction (particles finer than 2µm). Soils with an activity number over 1.25 are considered active and will have an increased volume change in response to moisture conditions. They will expand in wet conditions and shrink in dry conditions.

For all the Atterberg limits tests, soil samples consist of material passing a No. 40 (425µm) test sieve and are prepared for each test using wet or dry methods described in the standards. Moisture in Test specimens is adjusted by adding water, mixing with a spatula, and allowing to condition for at least 16 hours.

Atterberg Limits play a crucial role in the early stages of structural design to ensure that the soil performs as expected. Excessive changes in volume caused by moisture swings may cause settling or heaving of the structure.

We hope this blog post has helped you understand the role of Atterberg limits in geotechnical engineering and the equipment needed for lab tests. To discuss your application, contact our testing experts at Gilson today.

Be the 1st to Read, Subscribe to Gilson's Email Newsletter!