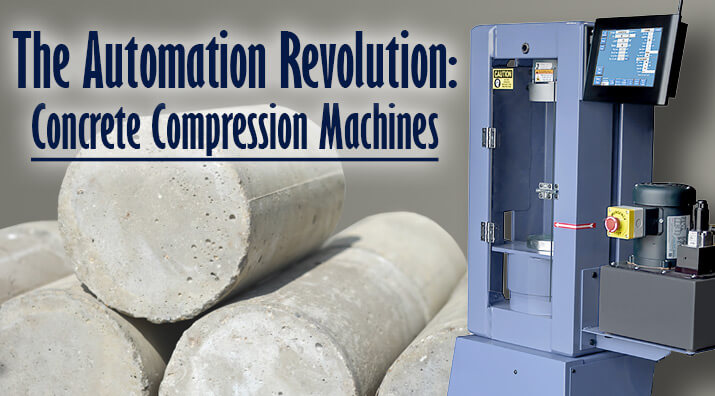 By the early 1900s, when many concrete strength testing methods were standardized, it was clear that the most useful form of concrete strength evaluation was the compressive strength test, usually performed on a cube or cylindrical specimen. For concrete elements subject to bending loads, special fixtures adapted compression machines for flexural testing of rectangular beams to determine the modulus of rupture.

Before hydraulic systems became advanced enough for accurate control of load application, stress rates were manually controlled using stopwatches, and accurate readings of peak load depended on how well you could read the needle of a dial gauge as it paused, vibrated a little, then dropped off during failure.

Maximum readings were manually recorded by pencil on a clipboard. Strength test results were calculated by hand, looked up on a chart, performed on a slide rule, and recorded in a logbook. Daily test reports were typed up in the front office and sent out in the afternoon mail, and the client could review them two or three days later.

Breaking a concrete test cylinder for compressive strength or a concrete beam for flexural strength are straightforward tests. Still, each step in the repetitious process must be performed correctly to produce accurate results. The job often falls to inexperienced technicians with varying motivation levels, and the more specimens there are, the more repetitive and boring the daily process becomes for them. It is not hard to see the potential for compromised test results. 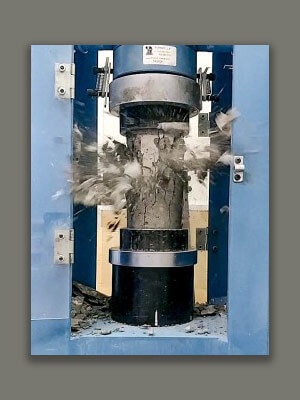 The introduction of electronic/digital testing systems greatly reduced recording errors and streamlined the reporting process. Still, accuracy and repeatability variations caused by manual control of loading and load rates, as well as inconsistencies between individual operators have not been resolved by standard controller units.

A typical compressive strength test for a concrete cylinder takes only a few minutes, but much of that time is spent watching the compression machine and guiding it through the test procedure.

The test method permits the application of the first half of the estimated peak load at a higher speed before completing the test at the specified rate. So, the operator observes the initial load until it reaches its estimation of the halfway point, then manually engages the machine's hydraulic regulation system for the remainder of the test.

A smooth and consistent changeover from the initial to the final loading rate ensures consistent accuracy and repeatability. For tests where two or more specimens are averaged for a final result, the changeover must occur at the same load point to ensure minimal deviations in reported strength. Even the same operator doesn’t make the changeover at exactly the same point each time. Since tolerances allow a range of loading rates, multiple operators or laboratories can operate within test method requirements, yet still, produce inconsistent results.

The technician must then monitor the final stage of testing to document the peak load before failure. If the operator is a bit slow in releasing the load, the test sample may shatter, creating a potential for injury, or at least making a mess to be cleaned up.

There are other concerns when depending upon human response to regulate complex test sequences. Loads must be applied smoothly and without shock. Load gauges need to be watched constantly in case of an unexpected sample failure. Load values must be read properly and manually recorded. When reading analog dial gauges, the operator must be aware of the effects of parallax.

Strategies for Accuracy and Efficiency

Studies show that a final load rate faster than the specified range of 35 ±7psi/second (0.25 ±0.25MPa/second) yields strength values an average of 2.2% too high. So, the actual strength of a concrete cylinder with a 5,000psi test result might be 4,890psi, or even lower if the load rate is too high. Conversely, speeds slower than those specified would produce an artificially low test result. In fact, if a load of around 75% of its ultimate strength is applied to and sustained on the concrete cylinder, it will eventually fail.

Plenty of technicians perform concrete strength tests in construction materials labs every day and successfully produce results within acceptable tolerances, but could these tests be more accurate and repeatable? Could operators be testing more samples in less time? In a busy lab with many samples, one or two technicians might spend several hours just testing concrete cylinders. It's clear that a couple of minutes spent preparing the next specimen for testing or completing a notation on the previous test rather than watching a gauge would save a significant amount of time.

As noted in this previous Gilson blog post, Concrete Cylinder Testing - Field to the Lab, concrete strength test specimens' accurate and meaningful test results depend on following standard practices for sampling and molding, initial and final curing, and handling. A properly executed laboratory test is the final step in producing valuable data that reflects the quality of the material.

Complying with ASTM and AASHTO test methods when testing concrete specimens for compressive, flexural, and tensile strength or elastic properties ensures reasonably accurate results. Many of the constraints for application and control of loading speeds and detection of peak loads depend upon human input, monitoring, and judgment. The tolerance of standardized test methods must accommodate a variety of compression machines currently available, including some with mechanisms and controls that may respond slowly to input and be awkward to regulate.

Automated concrete compression machines feature control systems to regulate loading, load rates, and break detection, resulting in increased accuracy, repeatability, and time savings. The operator selects the desired ASTM/AASHTO test procedure from the menu and inputs the requested specimen data. All that is left is to position the specimen on the platen or in the fixture and check alignment before activating the test cycle. At test completion, the sample is removed and replaced with another for the next cycle. The technician is free to use their time to complete notes and observations, prepare subsequent samples, or perform other tasks.

Reduced human intervention to observe and control the testing machine translates to a significant reduction in operator error. The benefits to laboratory quality control are clear-cut and immediate:

Automatic compression machines also optimize the flow of testing information. Testing data complete with sample ID, test results, and machine settings, along with laboratory and client information is collected and stored in real-time for uploading to a PC, network, or transfer to a USB flash drive. A printer can be directly attached for an immediate printout of individual tests or summaries.

Like conventional compression machines, automated machines come in a standard configuration ready for ASTM C39 and AASHTO T 22 compressive strength testing of concrete cylinders. A variety of optional fixtures and accessories are available to perform other tests: