Inventing the Sonic Sifter: How a New Cafeteria Changed the Sieving Industry 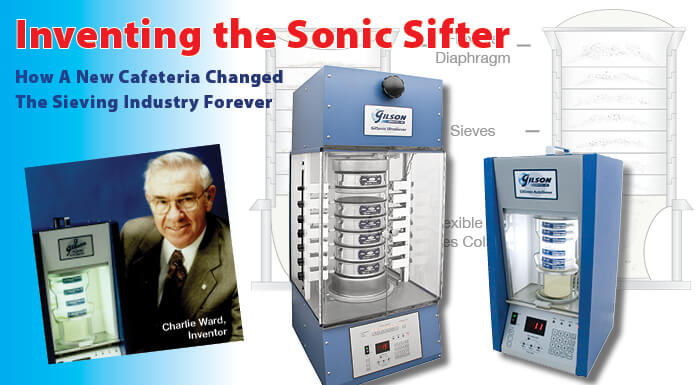 The centuries-old technique of sieving is a well-established method for measuring particle size and distribution of granular materials and powders. Its shortcomings are just as well known. Most materials have a lower size limit where sieving with a sieve shaker is no longer sufficient, and the agitation necessary for particle separation starts to break down and destroy some fragile materials. Particles in some substances resist separation and clump together due to electrostatic or moisture issues. For many years, these problems limited the effectiveness of measuring particle size by sieving. This article tells the story of how one man pushed back those boundaries.

Charles (Charlie) Ward was born in 1923 on a farm near Ashville, Ohio, the youngest of eight children. Times were tough for everyone during the great depression, and he remembers when the family couldn’t afford shoes for all the children during the summer. “I remember going barefoot to the 4th of July fireworks one year,” he reminisced when I spoke to him recently. Charlie graduated in 1942 from South High School in Columbus, Ohio, and like many young men during World War ll, enlisted for military service, joining the Army Air Force. He served three years as a mechanic performing technical inspections on aircraft in Tripoli, Libya. Tragically, his mother and father died within two months of one another while he was serving in North Africa.

Stationed in Milwaukee before shipping overseas, Charlie met his future wife Hilde by chance on a roller-skating outing. It took some detective work the following day, but he finally found her again at her workplace. They saw each other a few more times and resolved to be married when he returned. Charlie told me, “We had only been on a few dates, and when we were married, they said it wouldn’t last. They were right, so far it’s only been 75 years!”

The 50s and 60s was an exciting time to be working at the Allen-Bradley Company (now Rockwell Automation) of Milwaukee, Wisconsin. With a history stretching back as far as 1901, they established themselves with the invention of the compression rheostat, a device to regulate the speed of electric motors. Fueled by massive growth spurts in WWl and WWll, Allen-Bradley earned a solid reputation for producing reliable and extremely rugged electrical and electronic components for the defense industry in aircraft, missiles, satellites, and eventually, spacecraft.

In 1958, Charlie was a sound and vibration technician in Allen-Bradley’s Special Machine Department in Milwaukee, studying sound transmission issues that could affect hearing. At that time, a new cafeteria, complete with a sound system for background music, was being built in the company’s headquarters. There was concern that music from ceiling-mounted speakers in the 8th-floor facility would resonate through to the 9th-floor private living quarters of Harry Bradley, one of the company’s co-founders.

As part of the team working to resolve the issue, Charlie was tasked with playing recorded organ music from below, while team members on the next floor up stood by to detect noise or vibration. “As the music played through the loudspeaker, I noticed that the bass notes coming through the bottom port would move enough air under pressure to ruffle my pant legs.”

He thought back to a recent visit to the company’s ferrite division, where he had investigated noise problems with a machine used to separate fine powders. Feeling the air stirring from the speakers gave him an idea. “If I could trap the moving air underneath a speaker, maybe we could separate the particles with air instead of shaking the entire mechanism.

Back at his workbench, he mounted a conventional speaker on a piece of board and positioned it above a stack of sieves containing a sample of the ferrite material. “The particles moved up and down depending on the frequency from the speaker, and the speaker output could be adjusted to get the most travel out of the particles.”

“When I tested the ferrite material, some white stuff sifted out of it. When I called the ferrite division to ask about it, they said, ‘that’s impossible’! They had added some fine white stearic acid powder to their compound and wouldn’t believe that it could be sifted out.” Charlie had discovered that using sound energy would create a column of air to lift and separate fine particulates. That meant that very fine particles could be agitated with much less damage, and finer sieve meshes could reliably extend the range of accurate measurements.

An Idea Takes Off

“Shortly afterward, a company vice president walked past my bench and saw what I was doing. He immediately contacted our patent attorney.” Charlie made some refinements to the system and demonstrated the viability of the method. “So, after I ran some more tests, the company got behind me, and that’s how the whole project got started.” Charlie now holds six U.S. patents for particle sifting.

Charlie quickly found himself on the road promoting the new technology and equipment at scientific conferences and directly to large companies like General Electric, who were placing orders on the spot. Between Charlie’s tireless demonstrations and word of mouth from industry professionals, sales snowballed. “It was used for all kinds of nuclear materials and was a big hit in the pharmaceutical industry for the separation of fine particles for coating pills.”

Soon, the sonic sifter became widely known as the most accurate and efficient method for separating and sizing fine powders down to five micrometers (5µm) or less. Materials as diverse as pharmaceuticals, powdered metals, paint, abrasive diamond dust, and even dust mites have been tested, and of course, NASA performed tests on moon dust sampled during the Apollo 11 lunar expedition. Industrial Research magazine named it one of the 100 most significant new technical products of 1965.

As interest in the innovative method spread and sales continued to grow, Charlie and a group of investors from Allis Tool and Machine bought the rights to the sifting products and technology from Allen-Bradley, forming a new company to develop the sonic sifter and related items. After thirteen years of continued growth, Charlie felt the need to move on, “They didn’t want to improve the sifter, and I wanted to automate it.”

“I knew Bob Smith (then CEO of Gilson Company, Inc.) from sometime back and had been at a trade show with him in New Orleans. I asked Bob if he’d be interested in getting into the sonic sifter business, and he said yes.” After joining Gilson Company, Charlie moved back to central Ohio and got straight to work executing all the ideas he had for improving the sonic sifter. “When I came to Gilson, we did a lot of things to improve the unit, automate it, and make it programmable.” The GilSonic AutoSiever and UltraSiever units remain the most advanced sonic sifter units available for accurate separation of powders and granular materials as fine as 5µm. 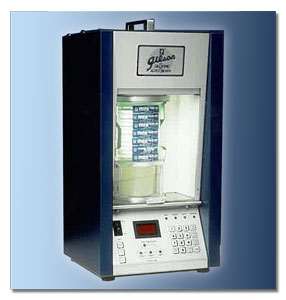 Charlie has been an active member of the American Society for Testing and Materials (ASTM) and the International Organization for Standardization (ISO) and served on several technical committees. He consulted for companies and organizations and traveled extensively overseas, presenting technical papers on sonic sieving and particle technology. Retired now, Charlie lives with his wife Hilde just outside of Madison, Wisconsin. 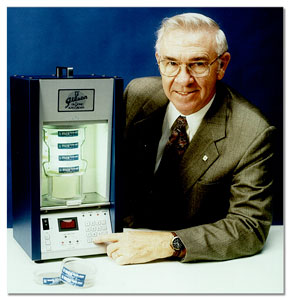 For more information visit our Sonic Sifters page. If you're finding it difficult to produce accurate particle size distributions for fine materials efficiently, contact Tech Support with questions and discuss a free demonstration test to see if the Sonic Sifter is right for your application.